Archive for the ‘knowledge’ Category

I Am My Worst Enemy

I have been wanting to post for a few days now and I have talked myself out of it several times. No, this won’t be a boo hoo, sad sob post, but an acknowledgement. One that I have known for as long as I can remember. It’s in the title of the post.

On some of my morning walks, I walk past a construction site. Right around Thanksgiving, I’m walking and look up and noticed pumpkins on top of a hill. The type of hill that is formed at a lot of sites as they move soil in preparation for the work, or soil that is hauled in.

Now, for one of the things I’m really bad at, not capturing the moment, I smiled and kept walking and for several days since. But as December rolled in, something must have dropped on my head because I took a couple photos.

It seems different now than when I first spotted them up there and could be why I’ve talked myself out of writing the post. But what I find more intriguing is the fact that either these construction workers put them up there or someone else did and they are still there.

In the end, it’s really nothing but pumpkins on a hill at a construction site. But at the same time, it really is…something.

My current project is due to noise I had been hearing from my front end while driving. After examination I narrowed it down to the outside tie-rod end on the driver’s side. 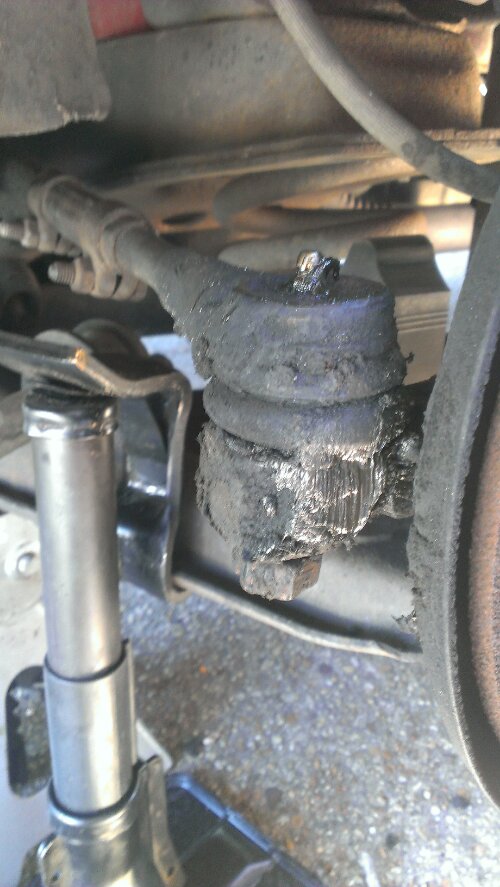 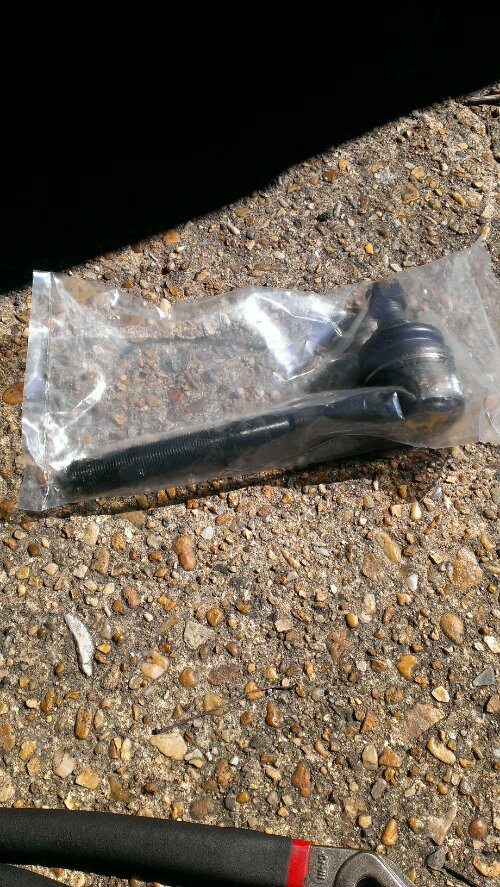 After I finished I took for a spin and the noise is gone, it handles better and now I have to get a wheel alignment.

Love IS hard but it is the only glue that bonds a relationship through the moments that are trying, for one or both in love. I’m sure thoughts and feelings of is it really worth it enter any relationship. That is only answered in the heart. How much can it take? How long does it sustain strength to endure…ensure…it will have what it desires, needs, wants in fulfillment and satisfaction.

Tenderly strong is the heart. Powerfully weak as well. Baffling it is by the decisions made because of it. It is that organ tied so in touch with that emotion called love….that feeling….embedded by the Master of love.

So fragile it is in the center of it all…in body and relationships.

All it wants?…to be loved. It’s that asking too much?

Sometimes we have to make adjustments that require us to deviate from our normal scheme of things due to unforeseen circumstances. How we handle those situations define, to a point the character that make up our being.

Defining moments have a tendency to strengthen our character…or they can make us weak. Who we are at this moment in time, could derive from the lessons taught by others and the lessons learned from life.

Attempts to get through it all by way of deception is of no benefit to the deceiver as much as they may think it is. They learn no true values of life and reap the hand they play. For the recipient of the deceptions, much is learned and they in turn grow wiser.

Good sound wisdom passed on, generates a fire that burns deep into the minds that seek knowledge for the betterment in life.

Circumstances are a necessity that is required for growth, and growth is necessary in life.

I’ve noticed that some of my old post have been read lately and that has given me a curious look myself. I’ve opened a couple of them to see what I’ve written and noticed that I’ve done some experimenting along the way since I started this blog.

I recently deleted my second most read post because I wasn’t really thinking when I wrote it and I thought it may have been offensive to women. Thinking back, I was angry not at women, but with TheWife and just happen to blurt out loud my frustration and the post really had nothing to do with why I was upset with her.

In general I am happy to say that my blog hasn’t really changed although I have done some experimenting.

This post…World Class gets a lot of reads and reflects the core of my blog. I believe that life in general is our place of learning. Not taking away from text books, but they can’t give what life itself does. If we can’t learn from life, all the books in the world are useless….that’s just me.

Life Has…is another post that has been read most recently by a few people. After reading this again brought to mind a post I had written about Steps.

Reading these reminded me of the style of poetry I like to write most although I have written a little on the dark side.

A stroll down memory lane has brought back the experiences I have in writing this blog and what I’ve learned along the way. It’s not a very popular blog but I do appreciate my followers and those who happen to drop in unexpected. I keep moving along and I’ll see what this journey has in store.

Time’s relevance is irrelevant at times
Other times, so vastly important
Seeking to achieve one’s destiny
Time waits for no man at all times


Man’s purpose, sought by man throughout
In degrees that vary for purpose in life
Some to persevere in want and need
By others in disillusionment and despair


Flashing moments portray accomplishments
Times even to them who feel failure
Remember one and all, remember
Time’s relevance, in the hands of one

We spotted this cocoon in our Canna Lily yesterday.

This is on a branch hanging over into our back area. 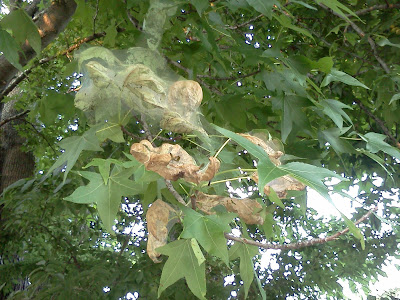 On This Father’s Day

I almost decided not to do this post but changed my mind again. I am reminded by events that brings perspective to what I’m doing with my life right now. The death of my brother sucked the air right out of me and it took awhile the start breathing again.


My nephew, my only sister’s oldest son had a stroke last year. He was fortunate to have someone with him at the time. His stroke was bad, but he is currently recovering. He is walking on his own and takes morning walks by himself. He stutters when he speaks and keeps apologizing whenever we talk…I keep telling him that he doesn’t have to do that. I really find joy when we do talk because he continues to make progress.


I talked to my sister today and find out that he has an aneurysm and will be having surgery.


For whatever reason I didn’t find out until three days after the fact, that my third oldest brother suffered a stroke this past Wednesday and he too happened to not be alone. Although his was not as severe as our nephew’s, it is a stroke nonetheless. He was at home yesterday but will be off of work for at least 4 weeks.


I can’t help but to think about myself and my family….what can I do for them. What can I do now that will be of benefit to them in the future. Life insurance?…sure. What more can I do? Some may say that insurance is enough. Not me.


These aforementioned events have touched that nerve…you know the one. That is why what I do is so important for me. I value my life and all that God has given me. My abilities, my desires, my love for those that have come into this life behind me. For me, it’s not just a matter of raising your children, but helping them to reach and to achieve, to realize they too have goals that can be reached.


So I continue to show my love by doing what I do in hopes that will be of substance to them in their future. Utilizing my time to build on the foundation that was started in my mind, many years ago…never giving up on that dream.


With that, I’d like to say that my second clock sold this past Friday. Some of you may have seen the prototype.

June 1st marks the ending of the first six months of 2012. Thinking ahead….I wonder what all of those superstitious people are gonna do about next year…..anyway, my mind goes to all of the resolutions that have been broken or never made it out of the gate. It’s been awhile since I’ve done the resolution things….very long time.


I penned the poster below November 12, 2011. I’d have to do a little more digging to see when it was first published on my blog or my CafePress website. It may sound cliche but I do get inspired when I read it. I wrote it in a way that whoever reads this, can apply it to themselves….the question at the end?….I ask myself, what have I done since the last time I read it. Sometimes I am so angry with me because I’ve missed easy ops, but I know there are more doors ahead. There are times when I muster a smile or two just knowing I am able to even try to pursue dreams. I frustrate myself by trying to do too much at one time….multi-multitasking. I love it when I get that giddy feeling.


I’m more determined than ever to reach for goals, achieve them and reach for more. I’m not going to wait until the beginning of the year to start my new year. Right now I feel as if I’m making that turn….you know the feeling….you’ve been on THAT road for such a long time you can tell that the scenery is starting to change. It’s such a good feeling.


I did edit the wording on this new poster…I took out the words “have to” on the third line and replaced them with the word “can” and did a little realignment with the rest.

I’m going to be posting pictures in a couple of weeks and I would very much  your advice, opinion, input. I’m going to have a few small giveaways during the month of June so it would be a good idea to tell your friends to like my Facebook page. That’s a few of what’s up and coming….gonna ride this wave as far as it will take me.


If you’d like to see this in a different flavor you can go here.

If you read my post not long ago about the two nails I had in my tires, my daughter was here a few days after that and they had a slow leak in their left front tire. I took a look see and lo and behold… 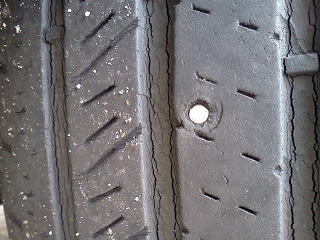 OK….
so now we fast forward to today….

I must say that I am so happy that I got this kit from WalMart. The name of this brand is Slime….sure came in handy.
No I’m not getting anything for mentioning this product….just self satisfaction.
Hmmm….now how much money have I saved?….